We specialise in Australian Custom Made Sublimated Clothing. Particularly Netball Dresses, Netball Bodysuits and Netball Two Piece Outfits. We have full in house printing and sewing facilities where we can make your dream reality.

Speak directly to the manufacturer. No "middle man".

See a lower price? Give us a call.

Netball Proshop is the international one stop shop for all who live netball. Whether you're a player, coach, umpire, teacher, member of an association or club, or just an enthusiast, Netball Proshop has what you are looking for. We offer the latest in:

Clothing
Netball Proshop have stock and made to order netball dresses, bodysuits, jackets, pants, tops, skirts, bibs and briefs which can all be designed and purchased online. Perfect for club uniforms.

Coaching umpiring and player resources
Our resources cover rules of the game, as well as exciting drills and training programs which are easy to implement, and sure to assist players in improving their skills, technique and fitness.

Equipment
Including storage and training aids. Excellent for match days and setting up passing, shooting, footwork and other training drills.

Netballs
Netball Proshop have an excellent range of netballs for all court surfaces and for players from the beginner to the elite. You'll be pressed to find balls which will last as long and retain the desired air pressure at our prices anywhere in the world.

Gloves
Increase your grip on the netball by 5 times in the dry and 10 times in the wet with our netball gloves.

All 100% Australian made from high quality lycra and sportsmesh. 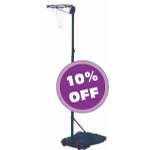